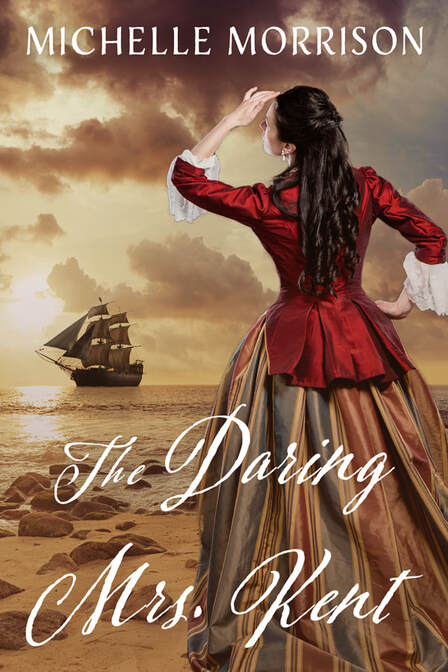 Josephine Kent knew fear intimately. It had been a part of her life for nearly five years, after all.
The look of displeasure on Thomas Kent’s face when she said something he deemed contradictory, the sound of his footsteps as he walked down the hall to her door, the cold, flat hiss of his voice as he ordered her to stand and accept her punishment had taught her the meaning of fear.
But it had been more than a year without those daily lessons. Fear in this tropical paradise had come to mean simply a start when one of the island’s giant centipedes skittered across her path or the lightheaded sensation she’d experienced when her brother Theo had taken her to the peak of Mount Misery and she’d tottered as she looked down into the volcanic crater. So far removed was she from the fear of her past that she had ventured into the central part of Basseterre alone today.
Now, however, her heart was pounding, and she could scarcely catch her breath. Perspiration—ever present, even when wearing her lightest dresses—ran down her back in rivulets. She pressed herself against the narrow alley wall and willed herself to calm down. It was highly unlikely the man she’d seen in the market was Josiah Benjamin, her husband’s henchman. The last she’d heard from Lady Amanda Howard, Benjamin and Kent had been convicted of corruption for the opium trade they had run through the workhouses they oversaw and sentenced to the prison hulks moored in the Thames.
She closed her eyes tightly and took a deep breath, then opened them and peeked around the corner of the building. She scanned the people along Fort Thomas Road searching for the blunt, angry features of Benjamin, but all she sawwere the dark faces of laborers and merchants and the occasional pale face of one of the English residents.
A flood of relief made her laugh shakily at her silliness and she stepped out of the passageway to continue to her destination: a newly-opened mercantile she’d heard had the finest cotton cloth from India. Walking along the road, she glanced from side to side, alert for squat, burly men with black hair, but when she’d walked nearly two blocks seeing only the same people she had encountered every day for the last year, she began to relax, and by the time she’d left the mercantile with a length of pale green sprigged cotton, she was back to her usual equanimity, a state that she had only achieved after weeks on board a ship with her dour but fiercely protective escort Chester, and a year in the safe keeping of her older brother here in Basseterre.